The largest drug store retailer in Canada, Shoppers Drug Mart has been in business since 1962 and operates more than 1,300 storefronts throughout the country. Even with its large brick-and-mortar presence, Shoppers Drug Mart sees its website as a cornerstone of its business, and recognizes the importance of providing a seamless user experience in the already-stressful process of ordering prescription medications. In order to do that, Shoppers Drug Mart uses FullStory to diagnose customer pain points, resolve issues quickly, and share crucial information among team members.

"I’ve used analytics tools in the past, and FullStory is by far the most intuitive and advanced in its search capabilities. At first I was the only person here using it, and now at least four teams are using FullStory every single day. Since introducing FullStory, we’ve become significantly more efficient at resolving support issues and have cut our registration drop-off rate nearly in half.”


Pinpoint cause of registration dropouts with session replay

Because of certain regulations, a major sector of Shoppers’ business is conducted online-only, and requires users to complete a registration process to order prescriptions. Before FullStory, Shoppers’ digital team knew that roughly 90% of users were abandoning the registration flow mid-login. They believed that this high rate was linked to issues with the proprietary login system used by Shoppers’ parent company, but were unable to offer evidence that this was the cause of customer confusion. With FullStory, the digital team was able to use hundreds of session replays to validate their theory to leadership, and then used FullStory data to design a new login system that has reduced the dropout rate by 45%.

Better understand site visitors who choose not to buy

Like many organizations, Shoppers Drug Mart once struggled to resolve support tickets in a timely fashion. When a customer reported a site error, the support team would either create an IT ticket or send an email to another person in the company. This initial step would typically be followed by several rounds of internal back-and-forth to glean the necessary information, extending the time-to-resolution to days or even weeks. With FullStory, the support team is able to diagnose errors instantly by viewing the user’s session, or easily send the session directly to another team member to be addressed. Issues that took weeks to settle before are now cleared up in a matter of minutes, saving time for Shoppers teams and their customers.

The Shoppers support team often receives unusual questions from customers. For example, once a customer contacted support because they were able to apply a single discount code to their order several times, but were then charged twice for the order. Multiple teams were involved in investigating the issue, but couldn’t find the source of the problem or any similar instances. With FullStory, the team is able to quickly search and find instances of errors like this one, and trace them back to the root cause. According to Shoppers’ digital team, now it often takes less than five minutes to nail down bugs that would otherwise be totally unidentifiable. 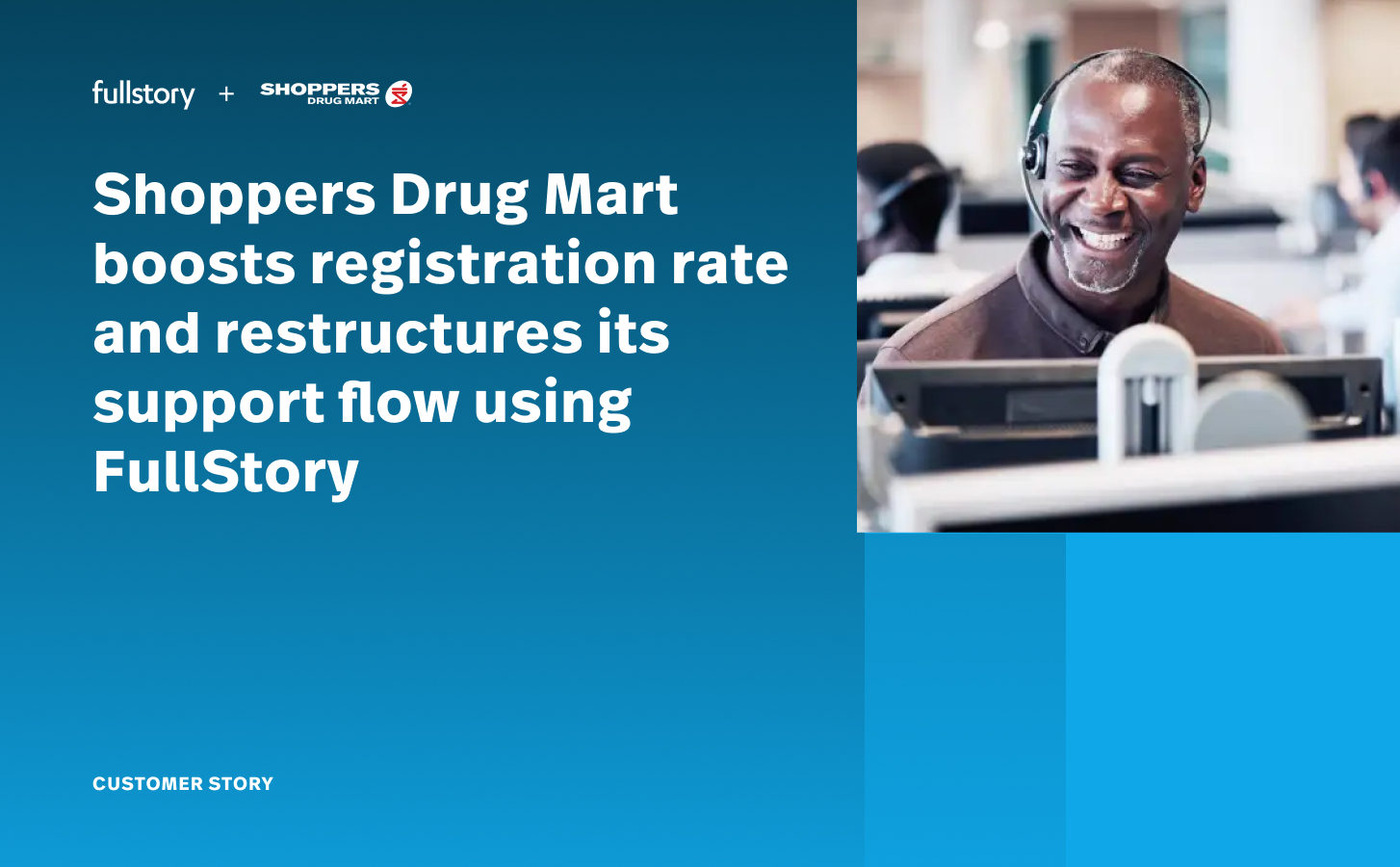 Want to take your digital experience to the next level? Let’s chat.

Request a demo of the FullStory platform, and our team will be in touch within one business day.